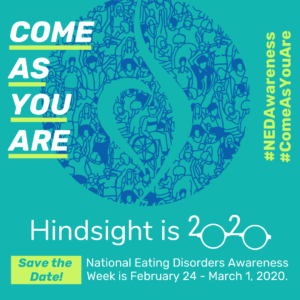 Known also by its acronym, NEDA, National Eating Disorders Awareness Week is set for February 24 to Mach 1 in 2020. This heightened awareness week, and the events surrounding it, aim to disparage the busload of myths and misunderstandings surrounding eating disorders, its causes, possible solutions, and bad or misinterpreted science.

Eating disorders include a host of psychological conditions that cause disorderly and unhealthy eating routines. There are some we are familiar with as a society. Anorexia, bulimia, or binge eating are not that uncommon in day to day banter or the news. However, EDNOS-cum-OSFED, Pica, Rumination or Purging Disorder, and ARFID might evoke confusion and estrangement. There are even new urban lexicons incorporating words like manorexia, which is… Yup, you guessed right! It’s anorexia as applied to men only and has its own distinctive set of symptoms and diagnoses.

Anorexia Nervosa: Viewing yourself as overweight even when dangerously underweight, thus seriously limiting or purging haphazardly your food intake.

Binge Eating: Same as bulimia, but no purge follows.

Pica: Craving and eating non-food substances, including but not limited to soap, paper, wool, cornstarch, even detergent. May cause poisoning, even death, if not checked.

EDNOS: Stands for Eating Disorder Not Otherwise Specified, encompassing individuals who have the symptoms, but do not fall clearly into any one diagnostic category.

OSFED: Stands for Other Specified Feeding or Eating Disorder. This is the new and preferred nomenclature that substitutes EDNOS.

ARFID: Stands for Avoidant/restrictive food intake disorder and causes individuals to undereat, due to waning interest or because they are put off by the sight, smell or taste of certain foods.

Rumination Disorder: Regurgitating food just after swallowing, to then chew, swallow, or dispose of it.

Purging Disorder: Purging to control weight without the binge eating.

Night Eating Syndrome: Eating to excess after waking up (at night).

NEDA doesn’t just emphasize myth busting. It also does its best to deliver the latest findings, scientific of course, and treatment options. It’s extra careful to word empathically, but clearly, what we are all up against: a mental health condition that can be extremely damaging to the body and mind if left untreated.

It is important to understand that, typically, eating disorders have a “latency” period of up to 149 weeks. That is, people affected take as much as (almost) three years to actually “come clean” and seek help. Also impressive is the whooping number of Americans estimated to be fighting an eating disorder: 30 million! Or that eating disorders have the highest mortality rate of any mental illness, including taking one’s own life: 1 in 5 anorexia deaths are suicides.

There are varied resources on and offline for all those people directly and/or indirectly affected by this scourge. Catch phrases like “Come as you are: Hindsight is 20/20”, “Join the Movement”, even “Disordered eating may be the precursor to eating disorders”, are there to remind, entice and lure all of us into doing something. So, take advantage of the many dedicated social platforms, physical resources, such as posters and videos, or collaborate with one of their many events to help spread the role of medicine and strategic science in eating disorder treatment.